This Is Everything You Need to Know About Anterior Pelvic Tilt 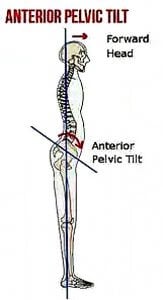 …then you have something called anterior pelvic tilt.

Some people say that this is caused by weak and tight muscles, and that it’s likely to lead to back pain, injuries, and other dysfunctions.

Others say that anterior pelvic tilt is totally normal and can’t be changed, so it’s not worth worrying about.

Well, the short story is that anterior pelvic tilt is normal and probably isn’t a major cause for concern. If it is a problem, it’s probably just poor posture, which can be corrected.

So, by the end of this article, you’re going to know know what anterior pelvic tilt is, how it affects your body and physical performance, and what you can and can’t do about it.

Would you rather watch a video? Click the play button below!

What Is Anterior Pelvic Tilt?

Pelvic tilt refers to how much your hips lean toward the front or back of your body.

In case it’s not clear as to what you’re looking at here, this is your hips viewed from the side, like this: And here’s another diagram of your hip bones from the same angle: 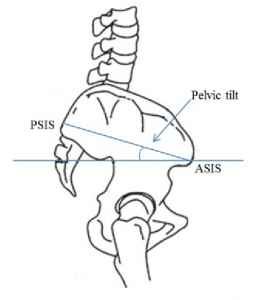 As you can see, there are two points on your pelvis that are of special interest here:

When you draw a line between the ASIS and PSIS, you get the angle of pelvic tilt.

Most people say that anterior pelvic tilt is caused by a muscular imbalance between the muscles on the back and front of your pelvis (hip bone).

This sounds plausible because your pelvis is secured by a number of powerful muscles and connective tissues, including the glutes, hamstrings, hip flexors, and core muscles. If one or more of these muscles are overpowering the others, misalignment could occur. 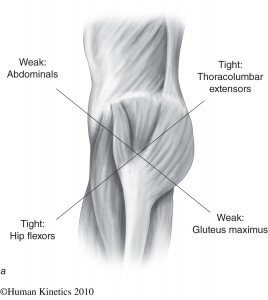 The problem with this theory is it runs afoul of basic physiology because anterior pelvic tilt is a normal variation of human anatomy.

For example, in one study, of the 120 subjects analyzed, 85% of men and 75% of women had some level of anterior pelvic tilt yet none had experienced low-back or hip pain in the previous year. Research also shows that most people have about 12 to 13 degrees of pelvic tilt.

For example, studies show that there’s no link between the strength of the muscles around hips and your pelvic position, which makes you wonder just how much these muscles can affect the angle of pelvic tilt.

Furthermore, it’s also unlikely that anterior pelvic tilt can increase the risk of injury or pain when you’re working out.

Your pelvic angle changes when you exercise, so while your hips might have a natural inclination toward the front or back when standing, they will be in different positions when you’re squatting, deadlifting, walking, or cycling.

So, the bottom line is this:

There isn’t any good evidence that anterior pelvic tilt is caused by muscle imbalances or biomechanical dysfunctions.

What does cause it, then?

Well, scientists haven’t quite figured that out yet. Our current best guess, though, is that anterior pelvic tilt is probably caused by the shape of our pelvic bones, which can vary widely person to person.

A team of researchers from the University of Manchester decided to investigate this by looking at the hip bones of 30 medical cadavers.

What they found is pelvic shape varied widely. Most people had about 13 degrees of anterior pelvic tilt, but some had as much as 23 degrees and others had none.

All of these people would have stood, walked, and squatted very differently because of their hip bone structures, not tight or weak muscles.

So, What Should You Do About Anterior Pelvic Tilt?

As it’s probably not caused by anything under your control, there really isn’t much you can do to change your anterior pelvic tilt.

Don’t worry, though — so long as you’re using good technique in your workouts, it’s unlikely that small variations in your pelvic angle are going to cause problems.

That said, there is something you don’t want to do, and that’s hyperextend your back while doing exercises like the squat, deadlift, or hip thrust, like this: 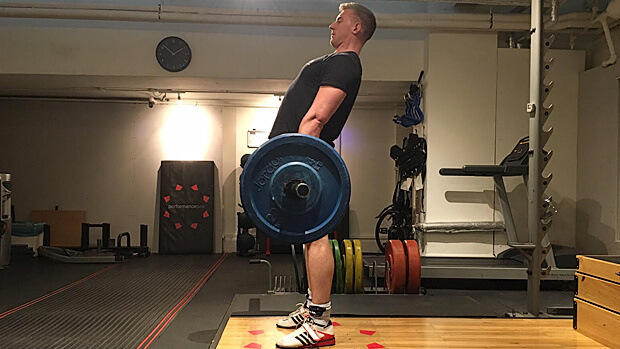 Anterior pelvic tilt isn’t to blame here — this is just bad form, and yes, it can increase your risk of injury.

Now, if you’re still concerned about your level of anterior pelvic tilt and want to do something, stretching and strengthening your hip muscles can’t hurt (it may not help, but hey, if nothing else, it’ll help you in your lower body workouts).

Here are two articles that will help you there:

You probably have at least a little bit of anterior pelvic tilt, and the same goes for me and everyone else.

Unless it’s causing pain, you have nothing to worry about as it appears to be more a matter of skeletal anatomy than muscle imbalance or biomechanical dysfunction, like most people believe.

That said, it’s a good idea to take measures to keep your hips healthy and mobile, and here are three simple ways to do that:

What’s your take on anterior pelvic tilt? Have anything else to share? Let me know in the comments below!