0
INVITE FRIENDS & GET $10
FREE SHIPPING & RETURNS
Home / Blog / Weight Loss / How Long Does It Take to Get Six-Pack Abs?

How Long Does It Take to Get Six-Pack Abs?

What is it about six pack abs?

Why are so many people so enamored of a rippling stomach?

Why is it the epitome of being fit and sexy?

Well, I’ll leave those questions to the “fitlosophers” of the world, and instead, answer this one for you:

How long does it take to get six pack abs?

And I mean a real six pack, not some hazy lines that are halfway visible in perfect, “half natty” lighting.

Allow me to demonstrate, if I may: How long does it take to get abs like that?

Well, you’re going to know by the end of this article.

So, if you’ve been cutting for months now and are frustrated with your lack of results, or if you’re just getting started and want to know when you’ll finally see abs in the mirror, then you’re in the right place.

Would you rather watch a video? Click the play button below!

How To Get a Six Pack

I have good news for you:

Getting abs is a lot easier than you’ve been led to believe.

You don’t need to develop orthorexia, choke down handfuls of fat burners every day, or do hours of core workouts every week.

At bottom, there are just three things you have to do to get the abs you really want:

The long story short is for your abs to really “pop,” you need to have a low body fat percentage and highly developed core muscles.

Most guys need to get down to around 10% body fat to start seeing their six pack come together, and most gals need to hit 20% or so to achieve the same.

(And in case you’re wondering, I’m about 7% body fat in the picture above, so you have to get a couple points below the 10/20% benchmarks to get that hard “super lean” look.)

Now, if that’s news to you, then I recommend that you pause reading this article and head over here, where I break it all down in detail and explain how to do each of those three things correctly.

If we’re already on the same page there, though, then let’s continue…

Use this workout and flexible dieting program to lose up to 10 pounds of fat and build muscle in just 30 days…without starving yourself or living in the gym.

How Long Does It Take to Get Six Pack Abs?

Alright, the moment of truth.

How long will it take you get a six pack?

If you’re worried that the answer is going to be hopelessly long, take heart.

When you know what you’re doing, getting a shredded stomach doesn’t take nearly as much time or effort as many people think.

The following chart breaks it down. 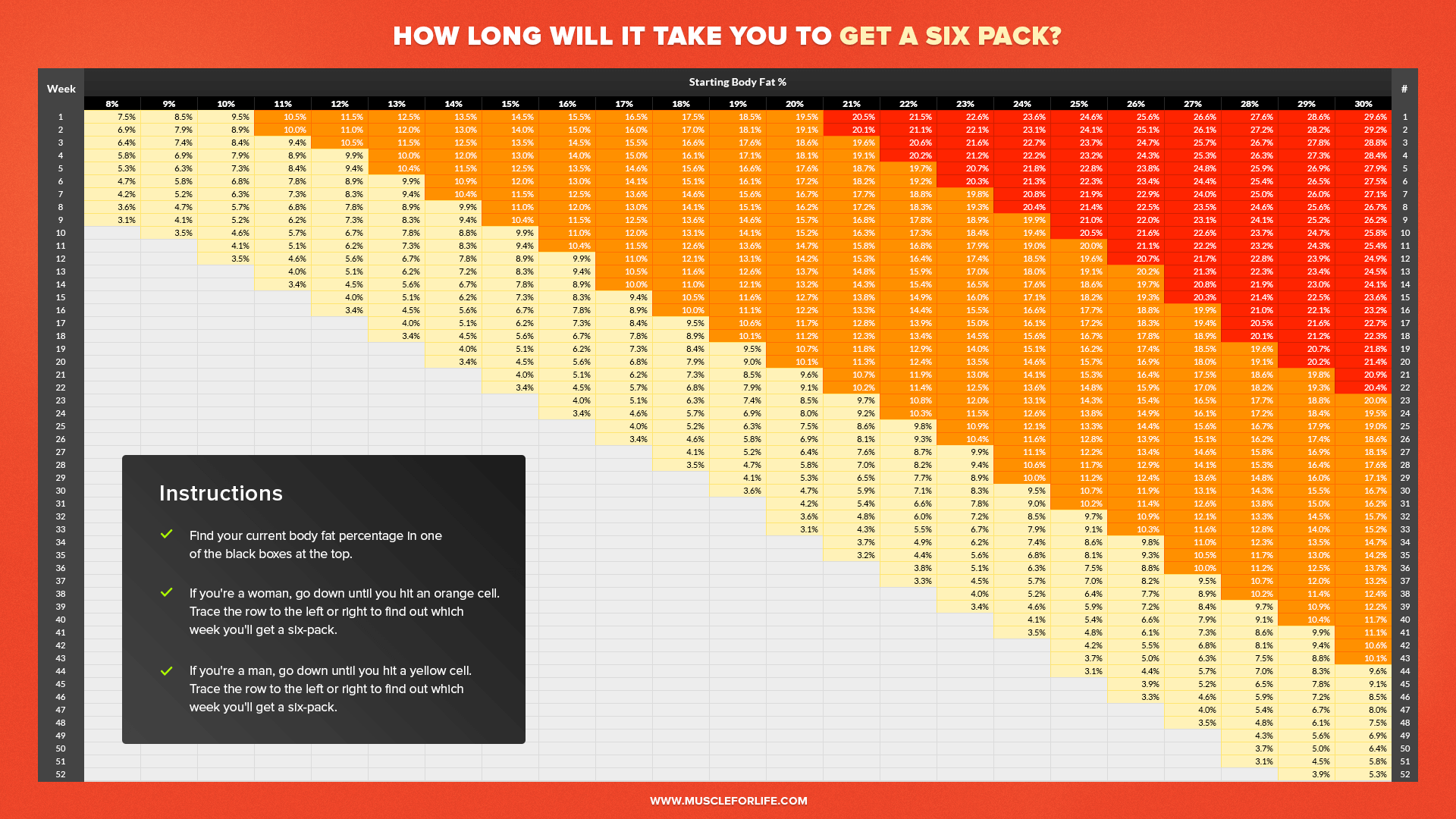 This chart assumes an average of just one pound of fat loss per week, and it’ll give you an accurate estimate of how long until you can start making your Instagram fam envious. 😉

Here’s how to use it:

So, for example, let’s say you’re a guy currently sitting at 22% body fat.

First, you find the column for a starting body fat percentage of 22%: Second, you follow that column down until you hit the yellow cell: Third, you follow that row left until you hit the numbers along the margin and see what you get: And voila, you see that it’s going to take you about 25 weeks to get that killer six pack.

Now, the actual amount of time it’s going to take can be slightly more or less depending on how well you stick your diet and training programs, whether you use supplements to speed up the process or not, and how efficiently or inefficiently your body tends to mobilize and burn fat.

You may also find that you don’t quite have the core you envisioned once you reach your target body fat percentage. Not bad looks at all, but just not there yet, either, like these beautiful people: Well, genetics aside (which they have in spades), what’s really going on here is the former folk don’t have enough core development to have the whole six pack package that we see in the latter.

What About “Stubborn Fat”?

The “big secret” to getting six pack abs is getting lean and developing your core muscles.

And that boils down to proper diet and exercise, not special ab exercises or supplements to “spot reduce” the fat around your belly.

That said, if this is your first six pack rodeo, you’re going to notice something:

If you’re a guy, your belly and lower back fat is going to hang on for dear life, and if you’re a girl, your hips and thighs are going to take their sweet time leaning out.

In other words, you’re going to find that some fat stores on your body go quickly while others barely seem to change.

Well, there are simple physiological reasons for this, and equally simple diet and exercise strategies that you can use to lose this “stubborn fat” faster.

Read this article to learn more.

The Bottom Line on How Long it Takes to Get Abs

Getting a six pack takes time. There’s no way around it.

It doesn’t have to take as much time as you might think, though.

As you can see in the chart above, a couple of months of cutting is all most people need to get their body fat percentage into the right range.

Once you’re there, if you have well developed core muscles, voila, you’ll have a six pack.

If getting lean isn’t enough, though, due to inadequate core development (this is the case for most people that haven’t been training seriously for at least a year or two), then you just need to bring up your core development.

Good luck, and let me know how it goes!

What’s your take on how long it takes to get abs? Have anything else you’d like to share? Let me know in the comments below!