x
Home / Blog / Building Muscle / Research Review: How Often Should You Work Out to Build Muscle?

Research Review: How Often Should You Work Out to Build Muscle?

There are a lot of ways to mess up your training plan.

Not doing the big, compound lifts.

Not resting enough between sets.

And finally, training too much or not enough.

That last mistake is one of the most controversial.

Old school bodybuilding logic says you should “blast” every muscle group with as many sets and reps as you can handle once per week, then rest 6 days before doing it again.

Others say you should train every muscle group 2, 3, or 4 times per week, but with much lower volumes.

There are countless success stories to back up both camps, so who are you supposed to believe?

That’s what a group of scientists led by Brad Schoenfeld of Lehman College wanted to find out in a recent study.

Let’s look at what they found.

There have been a decent number of studies looking at how training a muscle group more or less often affects muscle growth.

And most have been a wash, with no difference between groups.

So, these researchers decided to take a step back, look at all of the data on this topic, and try to tease out which way the body of evidence seemed to be pointing.

This kind of study is known as a meta-analysis, because it looks at a problem from a “meta,” or higher level perspective.

The main benefit of a meta-analysis is that by lumping together the results of multiple studies, you can spot trends that might otherwise be obscured in smaller studies with fewer subjects.

In this meta-analysis, the scientists narrowed down their list of studies to ones that…

After the researchers combed through the data, they found 10 studies that fit the bill. In every case, both groups used  the same exercises, volumes, and reps, and rested the same amount between sets.

Then, the researchers (including a member of our Scientific Advisory Board and statistical wizard, James Krieger), ran the studies through a variety of equations to ensure the results were accurate.

Over 8 weeks of training, that would work out to about an extra 1/8th of a pound of muscle for someone new to strength training.

That adds up over time, but it’s not a huge difference.

Here’s what the results look like when you organize the study subjects into different groups: 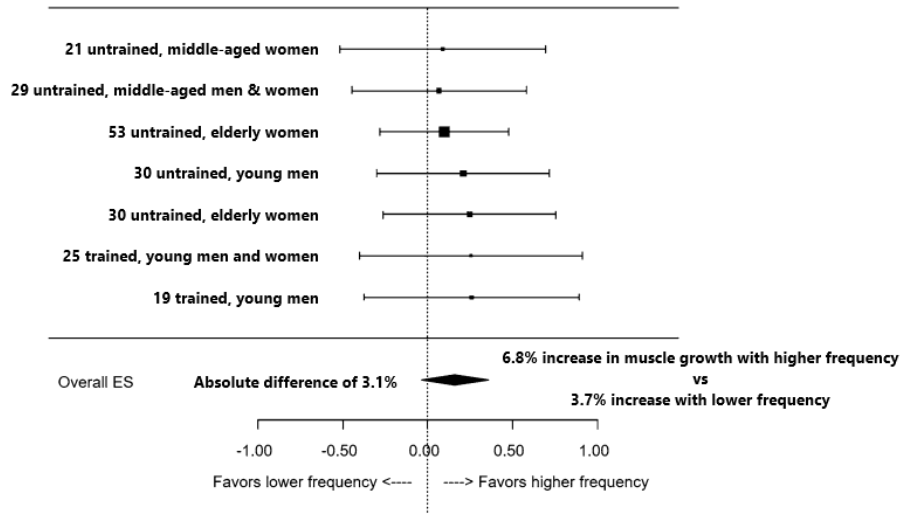 There are two ways to look at this:

When we look closer at the results, there are also a few caveats that make the results even less cut and dry.

With such a small improvement, it’s hard to say that higher frequency training is a home run for muscle growth.

But, here’s some food for thought:

All of the groups in this study did the same amount of volume.

On the one hand, it means that we know the differences in muscle growth weren’t because one group was doing more volume than the other group.

On the other hand, the main reason people agitate for higher training frequencies is because they allow you to squeeze more volume into each week.

It’s well established that doing more sets per week usually leads to more muscle growth, so if training more often helps you get more volume, it’s not a leap to say that it should help you build muscle.

For example, let’s say you currently do 6 sets of bench press once per week. By the 4th, 5th, and 6th set, you’re probably starting to get bushed. You might even have to decrease the weight.

What if you split those 6 sets into 2 workouts per week, though?

Then, you’d do 3 sets per workout, and probably be able to use more weight during each set.

You could take things a step further and add 1 set to each workout, thus increasing your total weekly volume to 8 sets per week.

That’s the theory, anyway, but this study didn’t look at that.

Something else to consider is that all of the studies included in this meta-analysis originally found no benefit of training more frequently. When the results were added together, though, there was a statistically meaningful increase in muscle growth.

This is a common theme in scientific research.

Small studies don’t find any benefit, but when you get a large enough sample size you can find a clear winner, which suggests there might have been some “hidden” benefits all along.

In the final analysis, here’s what the researchers concluded:

It can be inferred that the major muscle groups should be trained at least twice a week to maximize muscle growth. Due to an absence of data, it is not clear whether training muscle groups more than 3 days per week might enhance the hypertrophic response.

Before you throw away your current training plan, keep the following in mind:

For example, you could have a dedicated chest workout on Monday, and then do a few sets of chest after hitting your shoulders on Thursday.

This lets you train each muscle group about twice per week, without spending too much time in the gym.

If you want to give this kind of training a test drive, we’ve got you covered.

Follow one of the following workout routines below for 12 weeks …

The Absolute Best Triceps Workout: 5 Triceps Exercises That You Should Be Doing

How to Create the Ultimate Upper Chest Workout

The 7 Best Butt Exercises That Will Give You Glorious Glutes

The 6 Absolute Best Quads Exercises You Can Do

The 6 Best Hamstring Exercises You Need to Do

… and let us know how it goes in the comments below. 🙂

What’s your take on how often you should work out? Have anything else to share? Let me know in the comments below!

Armistead Legge is the Editor-in-Chief for Muscle for Life and Legion Athletics. He has completed over 100 triathlons and cross-country, cycling, and adventure races, has squatted and deadlifted over 400 pounds and bench pressed over 300 pounds, and and has researched and written for over a dozen organizations, including the National Institutes of Health. When he isn't helping people get into the best shape of their lives, he's lifting weights, riding his bike, hiking, camping, and reading.