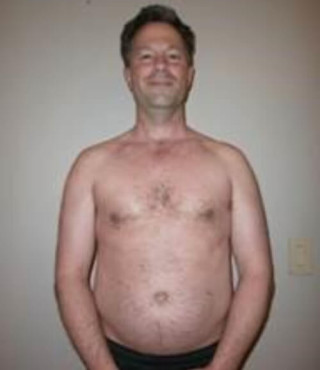 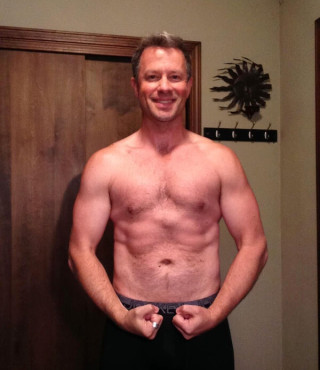 "I got leaner, built muscle, and I feel better about how I look in clothes now!" 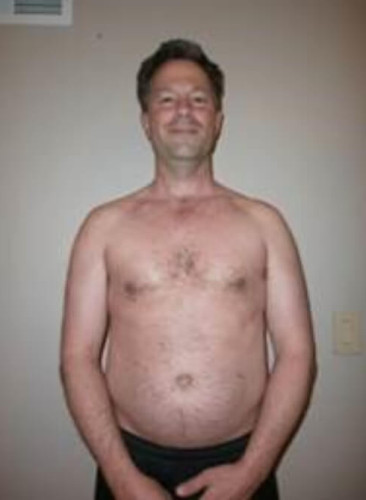 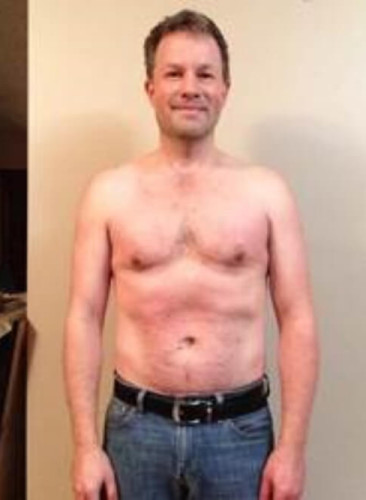 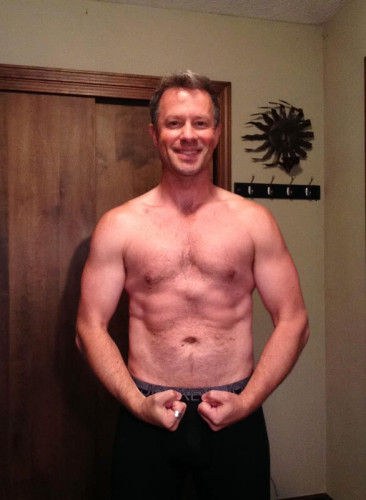 The caliper reading hasn’t changed much, oddly enough, so it’s been at about 17% body fat the whole time. I have an annual physical coming up soon, so I hope my doc can give me a more accurate reading.

I have only done a cut mostly because my body fat percentage was not yet where I wanted it to be. I went from 207 lb to 182 lb–so that was 25 lb gone.

My primary goal had been to get to 180 and secondary goal was to reach 177 (or 30 lb gone). Still working toward that. I think I would have reached that goal by now if I was able to fit some HIIT in, but I just haven’t cleared that hurdle yet.

I’ve tried it a few times, but have not worked it in on a regular basis. I’m hoping I’ll run across a gem piece of advice in The Little Black Book of Workout Motivation that will get me past that stubborn streak!

Mostly the five day split, but one of the things I like about this program is its flexibility. There were a few times when I was gone for a long weekend and I only had four days free to go to the gym– I was able to switch to the four day split no problem.

That way I didn’t feel like I was slacking, I worked all the muscle groups I wanted to work that week, and I didn’t have to feel guilty about going on vacation for a few days and not working out.

I saw the results of a friend of mine on Facebook who had been doing the program so I bought Bigger Leaner Stronger and never looked back.

Granted, he is twenty years younger than me. So I didn’t expect the same results, but I thought if he got those results, why not give it a shot?

I’ve lifted weights off and on for most of my adult life, but the great mystery was always should I do “higher reps with lower weights, or lower reps with higher weights?”

So I was drawn to this program because it answered that question with no gray area. I had always been afraid of getting too “thick” by lifting heavier weights, but I figured I’d commit to this philosophy and see how it went. I was surprised that I kept getting leaner around my belly even though I was building muscle elsewhere on my body!

The diet is pretty much how I’ve been trying to eat for a while based on other programs I’ve done. Sensible amount of calories, lower in fat, protein-heavy, and not lacking in healthy carbs.

The workouts in programs I’ve tried have been a lot more cardio-centric. I had read that weightlifting is good for burning fat, but I wasn’t convinced until now.

I used to dread having to untag myself in every social media picture from shows that I was in because I didn’t like how I looked. Now I’m feeling better about how I look in clothes. Still working on feeling good about how I look out of clothes, but that’s been improving too.

I think anyone can have success doing Bigger Leaner Stronger. I have recently joined the Muscle for Life Facebook page and I see all sorts of different personalities, levels of fitness, and levels of commitment to the program. You get out of it what you put into it.

I am a very detail-oriented person, so I enjoy digging down into the details, plugging the numbers into the formulas, and tracking my progress.

For the first six weeks or so, I resisted buying the Year One Challenge book and was just creating my own spreadsheets because I’m a nerd that way, but it soon became too much to keep up with. So I bought the book and am glad that I did! I decided to let Mike do all that formatting work, and I just plug in the numbers.

When I started this journey in January, I made a list of important dates that would serve as motivators and markers of my progress–a biometric screening at work, a photoshoot for a particular show, my annual physical, and of course the big 5-0 birthday. That really helped to keep me motivated. I would suggest it if you are looking for a long-term motivational tool.

I use Pulse, Forge, and Phoenix. I had been using a different pre-workout formula and definitely noticed a difference once I switched to Pulse.

I wasn’t buzzy by any means, but I really did feel more mentally focused. It was kind of weird, but in a good way. I have a tendency to fudge the last few minutes, reps, sets, whatever when I’m close to finishing a workout–like “oh that’s close enough”–but with Pulse, I am focused and motivated to go through to the end to reach the goal I had set for myself that day!