Pulse has been at the top of the preworkout sales charts since it launched in 2014. Now it’s even better.

Pulse has a special place in my heart.

It was one of our very first products, and at the time, there was absolutely nothing like it on the market.

Caffeine and theanine for a boost in energy and mood without the crash . . . 8 grams of citrulline malate and 4.8 grams of beta-alanine per serving along with clinically effective doses of betaine and ornithine for more strength, power, and muscle gain . . .

It was a true game changer. A “disruptive” supplement that quickly became our #1 bestselling product and has been at the top of sales charts ever since.

Over the years, however, more and more imitators have appeared.

Most are cheap knock-offs (fewer ingredients, pitifully low doses, the yoozh), but at least a handful are either copy-and-paste clones or almost-duplicates.

Thus, it was time to raise the preworkout bar even higher.

That was easier said than done, though, because Pulse already contained clinically effective doses of the most scientifically validated ingredients for boosting workout performance.

In a way, it felt like we were trying to enhance a masterpiece.

Nevertheless, there had to be something we could do to sharpen its competitive edge.

After much research and deliberation, our Director of Research, Kurtis Frank, and scientific advisory board determined the best way to improve Pulse was to add one ingredient:

Ah, yes, Alpha-GPC—the nifty molecule that helps the body produce more of the neurotransmitter acetylcholine, which is a major player in learning and memory and the most important neurotransmitter for muscle contraction.

The one that has been shown in research to markedly improve strength and power—and even more so than caffeine—after just a week of supplementation.

And the one that costs a freaking arm and a leg to dose properly.

Of course it’s that one.

Our margins on Pulse have always been pretty shitacular—in the beginning, it cost us a sack-shrinking $20 per bottle to make, yikes—so simply adding Alpha-GPC wasn’t an option unless the goal was to make not just the best but also the most unprofitable preworkout on the market.

Although that would make for an interesting advertising campaign, it would also make my P&L look like something out of Jimmy Carter’s economic plan, so realistically, we had two choices:

1. Do nothing and leave the formulation as it is.

2. Make other changes that make room for Alpha-GPC without compromising the effectiveness of the product.

In other words, somehow bring the cost of the product down without degrading its efficacy so we can include Alpha-GPC and thus upgrade its bottom-line results.

Kurtis wasn’t sure #2 was possible, but he was ready to begin the arduous process of finding out.

Three weeks later, it was 4 AM and he hadn’t slept in three days.

He was holed up in a basement lab in Ecuador, surrounded by reams of not-yet-published scientific literature, doing things frowned upon by the FDA.

But he also was on the verge of a discovery that was going to change everything we know about preworkout formulation. If his hypothesis proved true, the supplement industry was about to receive a thunderous bolt from the (Legion) blue.

Building muscle without even training? Check. Burning fat while binging on whatever you want? Check. Maintaining optimal health with nothing more than a handful of exotic herbs sourced from the Cloud Forests of Guatemala? Checkmate.

Okay so none of that actually happened.

What did happen, however, was a slow and studious review of the literature, and here’s what Kurtis proposed to pave the way for the arrival of Alpha-GPC:

Ironically, this was already on Kurtis’ to-do list because after a recent review of the beta-alanine research, he had concluded that basically all of its performance and muscle-building benefits were obtained with a daily dosage of 3.6 grams and there was little to be gained by taking more.

Moreover, reducing beta-alanine would mean reducing the intensity of the tingles, which some people like but many don’t.

Ornithine can increase endurance by helping clear excess ammonia out of the blood, but after looking into this mechanism further, Kurtis realized most people using Pulse probably don’t reach the levels of ammonia required to realize these benefits.

That is, ornithine was originally included to solve a problem that, it turns out, most people likely don’t have, and especially considering the fact that citrulline has similar effects in the body.

Reducing beta-alanine and eliminating ornithine wouldn’t fully cover the costs of adding in Alpha-GPC, but it would soften the blow enough to keep us in the fight. 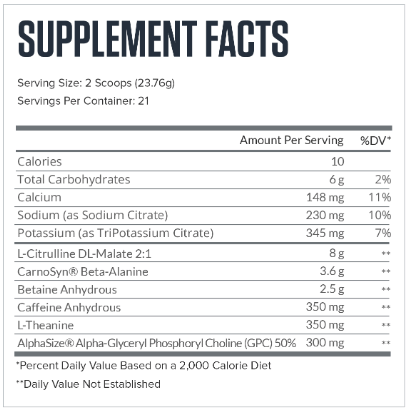 BUT WAIT, THAT’S NOT ALL!

The common complaint we’ve gotten about Pulse over the years is taste. And we understand.

When you’re used to drinking artificially flavored and sweetened beverages, something naturally sweetened and flavored usually tastes . . .off.

Sure, you get used to it after a bit, but it’s just never quite the same.

That’s why we used this formulation upgrade as an opportunity to also upgrade taste. Due to the changes in the ingredients, we were going to have to do a whole new round of flavoring anyway, so why not improve that as well?

To do this, we worked with a top US lab to tweak and enhance every single flavor of Pulse, and according to our “beta testers,” we’ve made huge strides.

Their favorites are now even better, their runner-ups are now closer seconds, and in many cases, at least a few of their no-gos are now worthy of their shelves.

So, in short, Pulse is returning to its former glory of a preworkout without equal, and now it also tastes better than ever before.

Want to see for yourself?

Order a bottle of FRUIT PUNCH today and we’ll rush it to your doorstep.

I’m just a little more than excited to release this honey badger into the wild, so if you do pick up a bottle or three, please do let me know what you think.

Any and all feedback is welcome!

P.S. Why just fruit punch, you might be wondering?

Well, while we’ve reformulated every flavor of Pulse, we first have to sell out of our existing stocks before we can release them.

Fruit punch is the first flavor to make the transition, but don’t worry, within the next month or so, all the rest will be switched over.

So, fruit punch for now, everything else soon!

How to Find the Best Protein Powder for…

The Absolute Best (and Worst) Supplements for Muscle…

Which Form of Creatine is Most Effective?